The four shortlisted books for this year’s Summer Reading Group were all novels by black authors. When readers reserved their spot, they had the possibility to make a donation in memory of George Floyd and all the other Black Lives lost because of the systemic racism in our societies. We are delighted to say that we raised €125 and would like to thank all the Summer Reading Group readers for their generous donations. We have transferred all proceeds to the association MRAX, which fights against racism, anti-semitism and xenophobia in Belgium.

The four novels’ styles of writing were varied and highly original in some. They also covered some common themes: from racism and identity, to social inequality. After discussing them, the votes for Best Summer Read were spread over three of the 4 books, but the one that came out on top was no surprise!

“Girl, Woman, Other” by Bernardine Evaristo (U.K.) was chosen as Best Summer Read 2020. It follows the lives of 12 black women in Britain over the course of several decades. The book is divided into four chapters each connecting 3 women, who are related in some way. Readers were enchanted by the varied characters and described the book as skillfully written. The fact that the only punctuation is commas did not bother them in any way. They loved the complexity in the women and felt that each one had many facets. They were impressed with the different character observations and found the links between them well-drawn.

“I Am Not Sidney Poitier” by Percival Everett (U.S.) is a novel about the misadventures in early adulthood of the protagonist Not Sidney Poitier. Each adventure mirrors a Sidney Poitier movie. There were mixed feelings about this book, with some readers loving it and others less so. Everyone agreed that it was well-paced and very funny at times. They loved the absurdity in the different scenes and felt it was a good way to portray tough topics without labouring them.

“Suncatcher” by Romesh Gunesekera (Sri Lanka) is a coming-of-age novel set in 1964 in a post-colonial Ceylon that is on the brink of change. Readers enjoyed this book the least of the four summer reads. Although they liked the fact that it was told from a child’s perspective, they felt frustrated and disappointed that some of the more interesting secondary characters were not given more substance. They also thought that the historical backdrop remained too sketchy. One reader said that the story felt like an ode to nature.

“She Would Be King” by Wayétu Moore (Liberia) was chosen as Nicola’s Coup de Cœur Summer 2020. Both Nicola and one other reader chose it as their best summer read. It is a debut novel that blends history and magical realism, and follows the lives of three characters with special powers. Readers were fascinated by this story which they described as interesting and beautiful. They loved the magic, and the back stories of the protagonists in part one. They were a bit disappointed that in the second part there wasn’t more about two of the characters as it focuses primarily on one. Nicola was completely enraptured by the story and described it as poetic, enthralling, and heart-breaking. 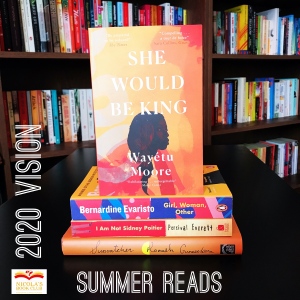 This site uses Akismet to reduce spam. Learn how your comment data is processed.

“You don't have to burn books to destroy a culture. Just get people to stop reading them.”